What is a Sewer Scope Inspection

The scope typically also identifies the material used within the sewer line itself.

Every house has a sewer line, and every sewer line can become obstructed or damaged. In most older communities the infrastructure is aging and beginning to show stress and our sewer scope inspections will help look for the imperfections, using the sewer inspection camera. We look for settlement, damages and blockages in the waste line. Your cleanout may be located in the basement, crawlspace or outside where the sewer line exits to the home. Any problems we locate are documented and provided within a full color, easy to read report or video.

Who benefits from a sewer scope inspection

Whether you just bought a new home, own a rental property, or starting to experience ongoing plumbing problems, a sewer scope can save you hundreds of dollars in the long run.

The most common reasons people choose to inspect with a sewer scope is that they have no idea the condition of their sewer line and wonder if they are going to have future problems. By spotting a crack now, you can prevent an expensive fix down the road and the inconvenience of a sewage backup on your property.

All buyers should obtain a sewer inspection if the home in question is more than 20 years old. Your line might be fairly new compared to homes built before 1950, but it’s fairly common for tree roots to clog them up over 20 years or so. 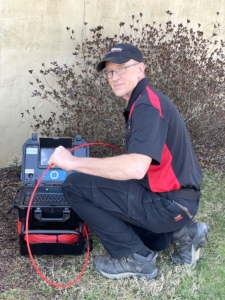 Roots crawl into tiny openings and expand in the sewer line, latching on to other debris, such as grease or eggshell waste from garbage disposals. This typically causes backups. Chemicals can sometimes kill the tree’s roots, but the pipe itself might be damaged and require excavation to fix the problem and that is the most common problem when sewer scoping is a root cracking a pipe.

Roots creeping into joints, or tiny holes in the pipes, and then growing into the pipes, breaking them apart as they grow larger. Settling of the earth around the pipes, or increased pressure from soils above pipes can unseat joints, as the pipe sections are shifting and settling in the earth. This earth movement causes the joints to come out of alignment, or separate entirely. Water erosion over time can erode the bottom section of pipes entirely, commonly called a “belly,” where there literally is no pipe structure left on the bottom of the pipe bed, and sewage is seeping out into the ground around the pipe. Sometimes we see a buildup of sediment or minerals in a line, which can cause constricted water flow or complete blockage.

Undetected leaks can occur underneath your home. leaking sewage can lead to home settlement and bad odors. A functioning sewer line may have problems that do not currently affect the performance of the line, but might cause a future problem.

Schedule Your Inspection
Scroll to top